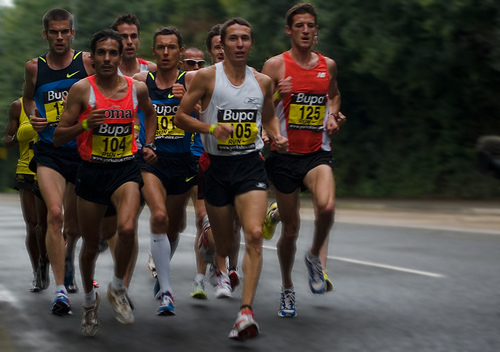 Some of the top marathon runners I have had the luxury of training with taught me the importance of having short term memory when things go bad.

They also taught me the importance of aggressiveness, hard work and how patience plays a huge part in running success.

I had one of the most unique opportunities to train under the Army World Class Athlete Program.

The elite unit is headquartered at Fort Carson in Colorado Springs, Colorado.

The standards to even be considered are extremely high.

Make The Most Of Opportunities

The difference, aside from athletic ability and performances, from Soldiers who get accepted and those who don't?

I owe a great deal of gratitude to CSM Willie Wilson and 1SG Mark Dunivan and the entire Army World Class Athlete Program command team for the opportunity to have served as a Soldier-athlete for three years.

Those three years were very special.

I was able to train with some of the world's top mid to long distance runners and here are a few tips that I learned from them.

There are only a few Soldiers selected to be in this highly competitive unit.

The 5 athletes I have listed below are only a few of the World Class Athlete Soldiers I had the great pleasure of training with.

I hope some of these brief descriptions can aid you in your thinking leading into your upcoming races.

Training with Dan was a fortunate and unfortunate opportunity to say the least.

He taught me the importance of desire and focus in going after a goal.

Remember, Dan was one of the best runners in the world for many years.

He ran for Nike for 6 years and was one of the first Soldiers to be a part of the Army W.C.A.P. team as a marathon runner.

I looked up to Dan while I was in college.

Training With Olympians Is Humbling

I never imagined that one day I would not only be on the same team he was on, but would be helping each other in track workouts.

I remember one where we did 8x1000m together.

Dan led a lap then I led a lap.

Dan showed me up close and personal how hard a runner has to train to compete at a national and world-class level.

Complete dedication and razor sharp focus, that is Dan Browne. I am fortunate to call him a friend.

It was motivating to be pacing Dan and than having him pace me in return during workouts.

He pushed me to my limits and taught me to stand up to the pain I dealt with while preparing for races, then to push harder.

Dan pushed me harder than any athlete I have ever trained with.

He is a no-nonsense runner but he taught me the importance of having big goals and do go after them 100%.

Get Out Of The Comfort Zone

Dan was probably the biggest influence I had while being a part of the Army WCAP.

I remember years ago having conversations with him while I was still a 2.43 marathoner asking him (at the time) if 2.22.00 was a realistic goal.

Dan never said it was impossible.

He simply told me to work my tail off and go for it and see what happens.

Dan broke 4 minutes for the mile while still at West Point so although we came from totally different ability levels, he always was approachable and professional to me.

This is how I have always approached those who have wanted my help.

I never wanted to be an untouchable.

An athlete who was not willing to lend a hand to someone who needed help.

Running Is More Then Just You

Athletes need to be told they can do anything.

We form too many limitations in our minds of what we can and cannot achieve.

What Dan proved to me was this, anything is possible, but you had better be willing to put out some intelligent training to achieve them.

He is the most talented, accomplished and hard working runners I have ever trained with in my 21 years of competing.

John humbled me quite a few times in workouts.

His intensity level was incredible and he has outstanding leg speed.

One of the most important things I learned from training with John is this, forget tracking how many miles you do during the week.

Focus on the purpose for the workout, try to hit the times you are supposed to hit and allow the training to take effect, but don't be in a rush. John didn't sweat the little details.

A West Point graduate. John is probably the strongest runner I have ever trained with.

He could do long runs well and his track workouts were a thing of beauty.

I knew doing speed workouts with John that I had to be at my best. He always kept the pace honest.

You Must Believe In Yourself

John showed me that you can always do better and think higher about your potential but also to keep a low-key attitude about it.

Golden always brought a sense of style and flavor to our track workouts.

Golden was positive and was extremely driven but he didn't flip out over a bad race.

He was always calm before races and ran smooth and relaxed during training.

Golden taught me just to chill out and relax about training and racing.

Be smooth, stay focused and confident and let your competition know it. 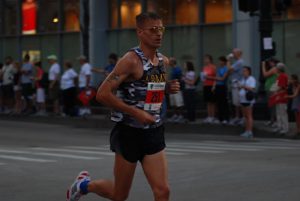 He came to the unit a 2.29.59 marathoner on conditional status like I did.

He also proved he was worthy to be there and that is why my respect for him as a person and athlete is so high.

He just recently ran a 2.19.49 marathon to finish 15th at the 2011 California International Marathon.

Kenny is a total workhorse and I'll tell you what I admire about him.

He is hungry and wants it.

THAT is the vital characteristic you have to have to achieve ANY goal you are aiming for.

Kenny went from a 1.09 half-marathoner coming into our team to achieving a 1.05.32 half-marathon at the Rock and Roll Seattle Half-Marathon.

Make Use Of Your Opportunities

He took an opportunity and trained as hard as he possibly could.

I had some of my best workouts with Kenny and had to work extremely hard to stay ahead of this guy.

There was no one in the Army WCAP team that I enjoyed running with more then Kenny.

I am honored to call Robert a friend.

Robert taught me the importance of friendship in running.

He also taught me the importance of looking long term and not rushing improvement.

He also taught me how vital running relaxed was.

Robert was all about hard work and always appreciating the effort.