Disappointment is handled by everyone differently. There are two ways of seeing it.

One, as a roadblock, something that will belittle you and cause you to quit. 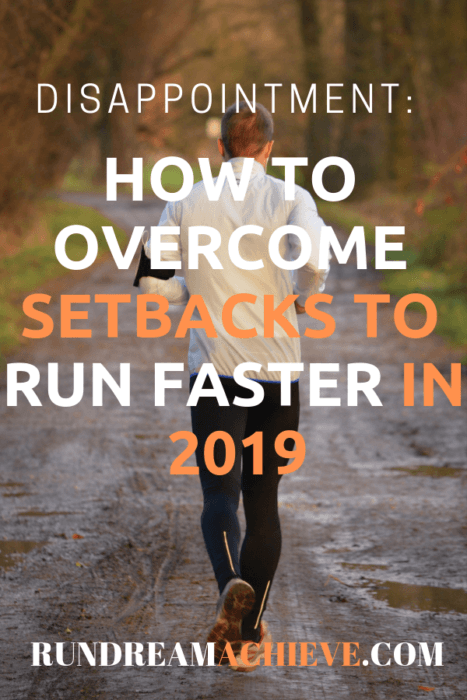 The second is as an opportunity to properly motivate you to adjust what went wrong and succeed ten-fold the second time.

I have been in for over ten years and what that time has taught me is you have to adapt to situations that are uncomfortable. How you handle being uncomfortable will dictate your mental state.

Racing is uncomfortable and so is taking risks and not knowing what the outcome of your training will be. It would be great if every race we ran was perfect, but that isn't the case.

If they were, how could you ever take value in a great performance without thinking back to that race when things went completely awry and you totally missed it.

You missed 5 aid stations. Furthermore, you didn't take in enough fluid and completely bombed. Lastly, you went out too hard and it cost you dearly. What do you do? You keep going.

How you handle disappointment really is the defining factor in long-term running success.

The greatest achievements in life were achieved by people who did not quit when a disappointment occurred. I think of Thomas Edison.

If I find 10,000 ways something won't work, I haven't failed. I am not discouraged, because every wrong attempt discarded is another step forward. Just because something doesn't do what you planned it to do doesn't mean it's useless.
– Thomas Edison

This is something very close to my heart.  I have tried hard to never let up in going after goals.

I spent from 2008 until the 2011 California International Marathon trying to qualify for the 2012 Olympic Marathon Trials standard.

It was the goal I had set after qualifying to return to the Army World Class Athlete Program at the 2007 California International Marathon.

I was disappointed over and over again. Furthermore, 35 seconds shouldn't be that hard to get but the marathon doesn't work like that. This is only experience but hopefully some of what I will be writing can help.

Caring about people and taking the time to encourage makes an enormous difference. I was fortunate to have mentors who molded me. In addition, teammates that were far better than me.

I ran three marathons in 2011 and handled disappointment in the same way. Keep trying. I was assigned to Fort Campbell 1 March 2011. My goal was to keep training despite moving on from the Army World Class Athlete Program.

I flew to Vancouver, Canada to compete in the 2011 BMO Vancouver Marathon in May. The elite race director, Brian Torrence, graciously gave me a two-night hotel stay and waived my fee. I was elated to have the chance to go for the time there.

My racing was not showing the work I was putting in.

Choosing to quit on something you believe in is choosing to be average. A disappointing race should make you all the more driven to reach your objective.

Furthermore, get pissed off if you have to but don't dwell on it. Re-group and keep trying.

I ended up running a 2.26.42 in November of 2011 to take 5th at the Monumental Indianapolis Marathon.

I had so many mini-disappointments with trying to master the 26.2 mile distance. Again, it is not a 5K or 10K. Tough goals require a great deal of patience.

There are countless individuals out there trying as hard as they can to run a great time.

If you're doing the very best you can, you are choosing to be great.

Also, you'll run faster by letting go of disappointments and using the sadness of that disappointment to fuel your future efforts.

Advanced and elite athletes are no better than you. They simply have found a way to endure disappointments longer. How badly do you want your goal?

Elite, to most, is individuals who are the very best in the world or far above average.

Elite, to me, is an individual who is completely immersed with their running and training. In addition, they are goal and mission-orientated who simply refuse to quit .

It isn't a marathon time run in this or that time.

Everyone handles disappointments in racing differently.

Believe in yourself. Have faith in your abilities. Without a humble but reasonable confidence in your powers you cannot be successful or happy – Norman Vincent Peale

One of the hardest things you can do when others are meeting their objectives and you are not. I had teammates, while a member of the Army WCAP team, who worked just as hard as I did who met their Olympic Trials Marathon standards.

Did I work as hard as they did?  Absolutely. Was it hard to watch them compete at the 2012 USA Olympic Marathon Trials and not be present with them in Houston? Yes.

It was great to see Soldiers I trained with qualify and compete in such an elite group.

My WCAP teammate, friend and two-time Olympian, Dan Browne, finished last at the 2012 USA Olympic Marathon Trials. He has been plagued with hip issues the past few months and finished with a time of 2.42. Want to know the definition of humble?

It was a tough day for me, but I came here to give it my very best and my very best today was finishing where I did. It's not an easy thing finishing last, but it's a harder thing to not finish. People were really, really supportive. – Dan Browne, 2.11.35 PR

Thanks for taking the time to read this post. Please feel free to leave a comment. I hope this was helpful.

Please send me your feedback as to what areas of training you are would like written about. Any area I can assist you with. Writing on my personal experience in sport is my way of paying it forward to all those who helped me in my own journey.